The Fremantle Dockers have strung together back-to-back wins, defeating the Adelaide Crows on Sunday and charging into the top eight.

Fremantle earned a spot in the top eight on the AFL ladder after conquering Adelaide at the Adelaide Oval on Sunday.

After a seesawing battle for three quarters, the Dockers upped the ante in the final quarter on the back of a dominance in clearances to claim their first win on the road this season.

The Dockers managed only three goals for the first half, before adding five in the third quarter and four in the final term to triumph by 12 points.

It was a lacklustre performance from the Crows, who struggled for cohesion and a winning formula.

Hamstring issues kept the defender off the national stage until returning this weekend and he went straight to Walker, who leads the Coleman Medal after a stunning start to the season.

And the challenge facing Logue was immediate with Walker taking a screamer, the equal of any in his lengthy career, just two minutes into the contest.

Walker hit the post, but made amends 10 minutes later when he took advantage of a free kick. Late in the first term, Walker pulled down another strong mark and was then unselfish in handballing to Shane McAdam for the goal.

The desperation of Tom Doedee in the first quarter was evidence of why he was acting captain in the absence of Rory Sloane.

Midway through the term, he threw himself across the boot of Nat Fyfe to prevent the Dockers champion from bombing the ball into the 40. Two minutes later he repeated the effort to deny Fyfe a shot at goal.

Then he stopped a shot at goal from Travis Colyer when the ball cannoned into his head.

The Dockers were forced to throw medical emergency Mitch Crowden early in the contest after Adam Cerra was forced from the ground due to an ankle issue.

There were further concerns for the visitors when Sean Darcy retreated to the bench for treatment on his left leg. He was able to return to the game though and had an impact.

After a scrappy first half in which the highlights footage would have been short viewing, the trend stretched into the third quarter.

However, there were moments when the class acts showed off their skills, such as the lead-up to Docker Lachie Schultz’s goal 12 minutes into the second half.

Fyfe used the ball effectively to hit Michael Walters, who kept running before kicking the ball perfectly to Schultz 35m in front of goal. The accurate set shot enabled the Dockers to level the scores.

The Dockers bagged five goals for the third term with Matt Taberner having an influence as the go-to forward.

Schultz had his own significant moments in the final quarter.

Sent from my Galaxy Footy fans will have to wait to find out if 100 per cent crowds will return for Anzac Day. Here’s why. 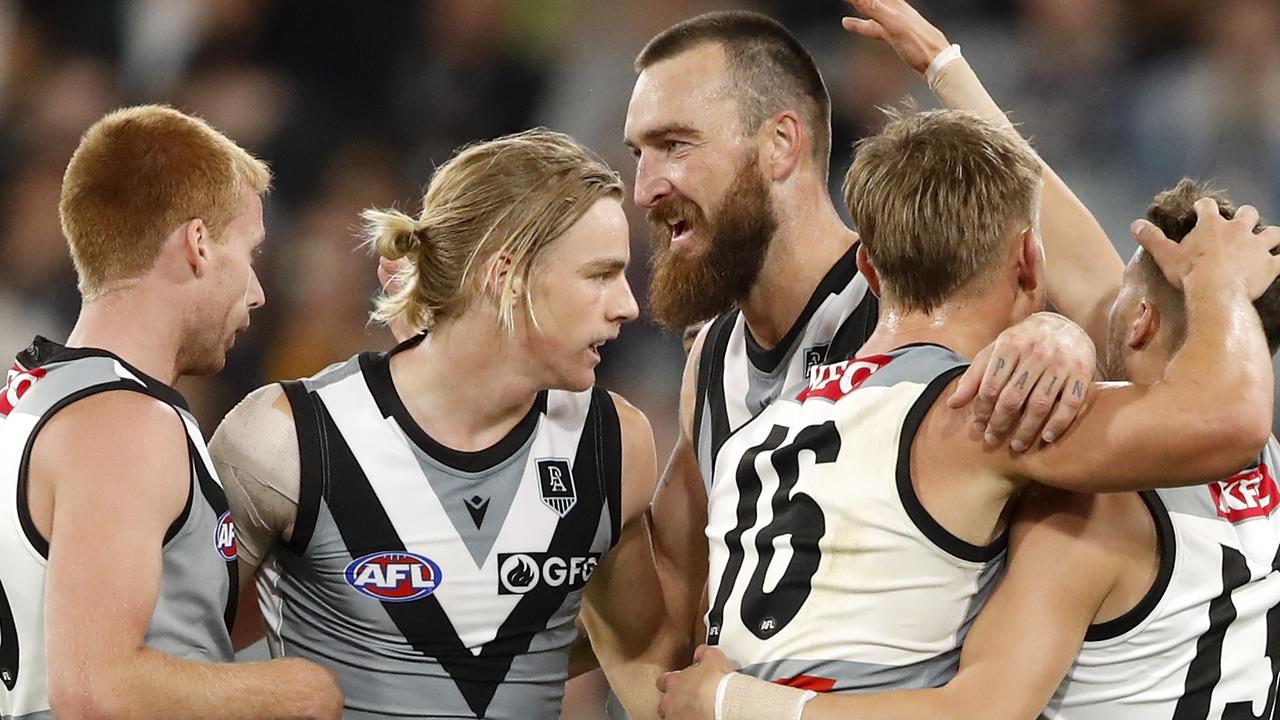 The Power of the MCG

Port Adelaide relished playing on the hallowed turf of the MCG, while Carlton took plenty of lessons away from the two sides’ encounter.