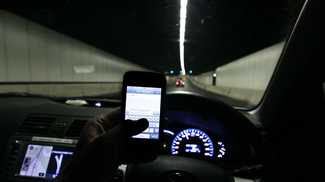 A man who was already in trouble for using his mobile phone while driving is now facing drugs charges after police searched his car.

Darren McCaughey from the Tweed Byron Police District said the 30-year-old was seen to be using his mobile phone as he drove.

“Police clearly saw the illuminated screen of the phone being held up towards the left side of the male driver’s face,” he said.

“Police subsequently pulled this vehicle over to question the driver about this offence.

“Police approached the driver of the vehicle and began to speak with him.

“After speaking with the driver, and as a result other inquiries, police searched the motor vehicle.

“During the search police found a glass pipe associated with the use of methamphetamine.

The man will face court on May 3 for possession of a prohibited drug.

He was also issued a fine for using his phone while driving.