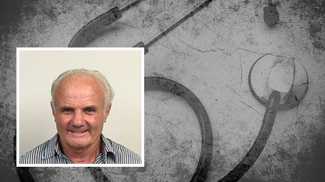 A doctor convicted of performing an aggravated sexual act unsuccessfully appealed his conviction in the Lismore District Court on Thursday.

The court heard on the day of the offence, December 5, 2019, the victim Tiona Walsh, who consented to being identified, had gone to the doctor for a routine appointment for a biopsy on her foot.

During the appointment, the then 25-year-old, who was also a work colleague, told Dr McNab about a back problem and he suggested he could take a look at it.

He asked her to remove her shorts, which she did, before placing a modesty sheet over herself.

The doctor told her he was going to remove her underwear, which he did.

It’s what happened at this stage of the procedure that formed part of the grounds of Dr McNab’s appeal.

His barrister, Ragni Mathur, told the court there were inconsistencies.

In Ms Walsh’s evidence, she told her mother she had said “no” after the underwear was removed, but in court evidence she told him “no, no, no” while he was removing the underwear.

Ms Mathur said this, in combination with the doctor’s good character, meant it was improbable that Dr McNab would have ignored the protests of “no, no, no” if the words had been said.

She also said he had implied consent due to Ms Walsh’s silence.

However this was not accepted by Judge Jeffery McLennan.

He questioned why Dr McNab asked Ms Walsh to remove her shorts, but didn’t ask her to remove her underwear, a more intimate garment.

“Why (would he) think the silence that followed afforded him reasonable grounds that she was consenting?” Judge McLennan asked.

“He could have simply asked (her to take her underwear off).

“I find it extraordinary a general practitioner would take it upon themselves to remove the underwear of any patient.”

Ms Mathur also said it had not been proven that Dr McNab had removed the Ms Walsh’s underwear for any reason other than a medical purpose.

The victim’s evidence stated Dr McNab told her “I want to make you orgasm” and “I want to slip it in”.

But Ms Mathur said the Ms Walsh had not mentioned this to her mother, husband or police, raising questions of credibility and whether she was “embellishing”.

During the appeal, Ms Mathur also asked the court to consider that two people had walked into the room during the consultation.

She said it was implausible he would have sought to gratify himself knowing staff walked in and out regularly.

In his judgement, Judge McLennan said he found the Ms Walsh’s evidence coherent and convincing.

He said the inconsistencies of her accounts were demonstrative of someone in distress.

Judge McLennan said it was not implausible that a medical practitioner would assault a female patient, nor that an offender would carry out acts of sexual misconduct in a time or place where they risk discovery.

He said expert evidence given during the hearing demonstrated there were a number of protocols a doctor would follow to gain consent and ensure a patient’s comfort before underwear was removed and these had not been followed by Dr McNab by his own admissions.

He regarded Dr McNab’s conduct to be reckless and did not accept his version of events and found the conduct to be demonstrative that he had an improper sexual purpose.

He dismissed the appeal and upheld the conviction.