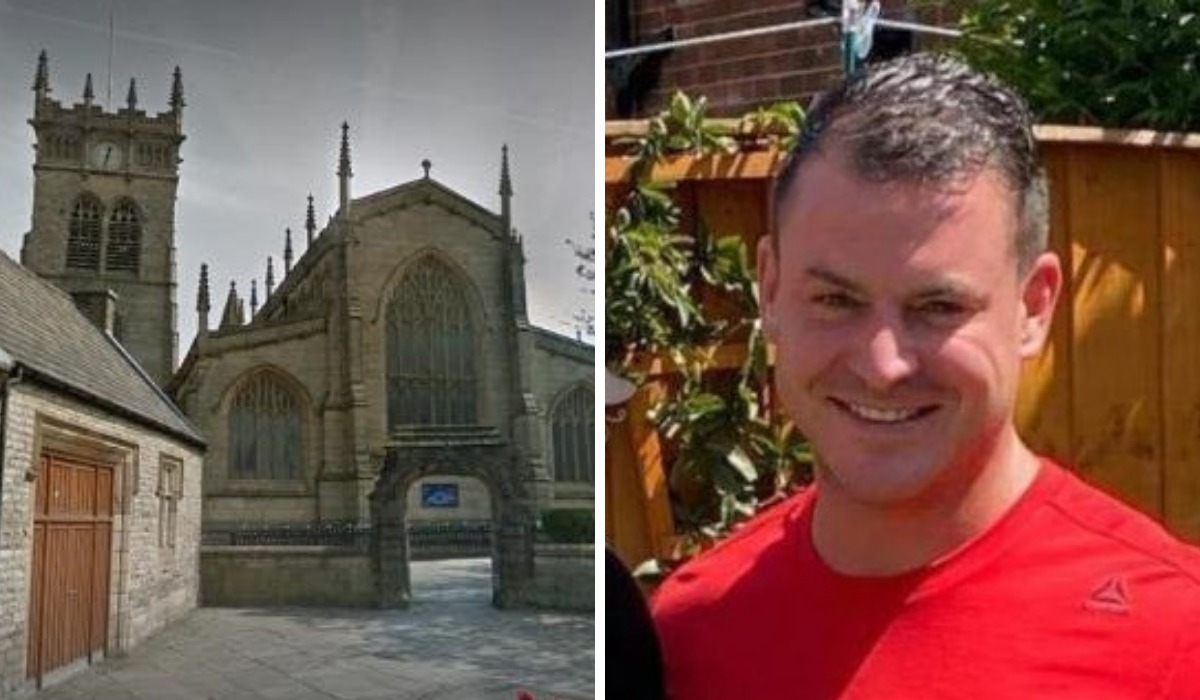 A MAN was so determined to steal his victim’s £11,000 Rolex watch that he recruited strangers who had just got off a train to help him commit a robbery, a court heard

Victim Steven McMyler was brutally kicked in the face as he sat in church gardens, suffering a brain injury and dying shortly afterwards at the scene.

Lewis Peake, from Little Lever and four people from Liverpool he had recruited, ran from Wigan Parish Church gardens, but a jury at Manchester Crown Court heard how callous Peake later returned.

Ignoring fatally injured 34-year-old Mr McMyler lying on the ground, he grabbed the dying man’s suitcase and made off with it.

Opening the case for the prosecution Mark Ford QC told how, after suffering a broken relationship, joiner Mr McMyler planned to take a break in Thailand. But while in London he changed his mind as he realised he would have to quarantine for two weeks due to the coronavirus pandemic and so headed home to Wigan instead on August 6 last year.

Arriving back in town with his suitcase Mr McMyler headed for Goldsmiths jewellers to get a value on the gold and stainless steel Rolex Submariner watch he was wearing.

After being told the watch was worth £11,250 he went to the Moon Under Water and Raven pubs for a drink.

Encountering 30-year-old Lewis Peake in Wallgate, the pair of them headed back to the Raven pub for more drinks and Mr McMyler made the fatal mistake of telling Peake the value of the watch.

The jury was told that Peake, determined to rob his acquaintance, went outside to try and recruit two boys, offering them £100 to attack Mr McMyler.

When the offer was refused Peake and Mr McMyler headed for Wigan Parish Church gardens where they sat on a bench taking drugs.

But Peake was still determined to carry out his plan and when two men and two youths from Liverpool arrived in the church gardens after getting off a train just before 7.30pm he wasted no time recruiting them.

“Purely by chance they were to encounter the other defendant, Mr Peake,” said Mr Ford

He added that, as Mr McMyler sat on the bench one of the group kicked the victim in the face, knocking him unconscious.

But Peake was wrong if he thought the watch, which has never be recovered, was now his as the others turned on him and a boy, who was aged just 13 at the time and cannot be named for legal reasons, smashed him over the head with a bottle.

The four from Liverpool then ran off.

“They were seen to be laughing or grinning,” said Mr Ford.

None of the defendants had checked on or helped Mr McMyler who was clearly badly injured.

“If any one of them had had any reservation about what they had done or what they had seen occur, they would not have been seen laughing or grinning as they ran from the scene of the crime,” said Mr Ford.

After unsuccessfully asking a nearby motorist to take them back to Liverpool in return for £100, they were picked up by a taxi to took them to Kirkby.

Meanwhile Peake, who had also run off and was bleeding heavily from his head wound, returned to the scene as badly injured Mr McMyler lay dying on the ground. Instead of summoning help, he grabbed the suitcase and headed for a friend’s house in Larkhill Avenue, Wigan, where he was later arrested.

He denied committing the crime but complained hat he had been robbed of £200 by the others.

Despite the best efforts of members of the public, who found Mr McMyler, and paramedics, he was pronounced dead at the scene at 8.11pm. The severe head injury had resulted in a cardiac arrest.

At Manchester Crown Court four people are on trial. Each denies murder, manslaughter and conspiracy to rob.

They are: Peake, of James Street, Little Lever; Michael Wilson, aged 20, of Northfield Close Kirkby; a 17-year-old youth and a 14-year-old boy who cannot be named for legal reasons. A fifth person has also been charged with the same offences but is unwell so his trial will be held at a later date.

Summarising the case to the jury, Mr Ford said Peake had only met his victim that day.

“Perhaps, on the basis of the conversation he had with Mr McMyler, Mr Peake considered Mr McMyler to be a vulnerable individual,” said Mr Ford

“He decided by whatever means necessary, to take the watch from him.”

And he warned the jury: “This case involves violent, shocking events which may arouse in you strong emotions.You need to do your best to put feelings like that to one side.”