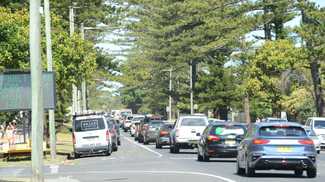 The department has reported the two sisters visited the Byron Beach Hotel between 7.15 and 8.30pm on Friday, March 26 and The Farm in Ewingsdale between 8 and 9.30am on Sunday, March 28.

It is not yet clear exactly when the pair visited or which venues they attended, only that they were infectious at the time.

“The Queensland Government has announced two people who have tested positive for COVID-19 were in Byron Bay while infectious,” Byron Shire Council said in a post on social media.

“As we learn more we will let you know.”

>> How our first returning music festival will stay COVID-safe

Queensland’s chief health officer Dr Jeannette Young has revealed two sisters who have tested positive for the virus recently visited Byron Bay while they were infectious.

Dr Young said this amounted to “significant community transmission”, with “many venues” affected.

She said during a press conference this morning two colleagues of one of the recent cases tested positive yesterday.

One of those visited Gladstone for three days while infectious, Dr Young said.

She said the pair who visited Byron Bay are sisters, one of whom works as a nurse in a COVID-19 ward.

Dr Young said the source of their infections was not yet confirmed.

“Very late last night I was notified of another case who happens to be a nurse working in the COVID ward,” she said.

“I’m not sure whether that’s where she’s acquired it.

“We will need to wait for genome sequencing results.

“Her sister is also positive.

“They have recently been in Byron Bay during their infectious period.

“So we now have significant community transmission and significant numbers of venues of concern, all through Brisbane and we know that people have moved from Brisbane out into the broader community.”

Five local government areas that make up Greater Brisbane are going into a three-day lockdown, announced by Dr Young and the Queensland Premier this morning.